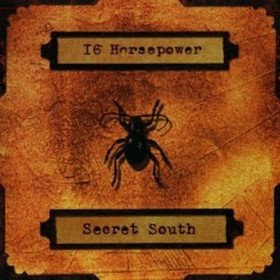 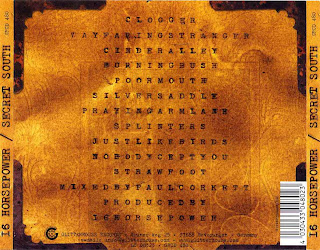 16 Horsepower - Secret South(2000)
Mp3 @ 192 kbps -96 MB
On this, their third full-length studio album, Sixteen Horsepower has proved what their long-time fans have always known: no one else is doing this kind of music quite this well! The musical landscape of Secret South is something akin to the Appalachian woods: deep and complex. There are so many layers here that you will find something new nearly every time you experience these eleven songs. Frontman, David Eugene Edwards, who says he wrote this album at the piano, has set aside many of the instruments that made their sound so unique in the past. What do we have left? One incredible piece of artistry.
What may strike loyal fans as something a bit different is the change in mood on this album. There are far fewer pot-boilers here as there were in the past. Sure "Clogger" kick-starts the album with some real fire, but the sustaining 'feel' of the whole project is more of water rising to a rolling boil. "Cinder Alley" and "Splinters" (two of my early favorites here) are great examples. To compare the beginning and ending of the songs you might not have guessed Edwards and co. would `go there.' These guys, instead of torching gasoline-soaked bonfires like they have in the past, turn up the flame slowly. Soon the songs are well-ablaze. "Strawfoot" is a great example of how you may find yourself listening intently at the subtle beginning but soon discover your toes are tapping.
What I hear here is the sound of a group of musicians who have matured to the point of restraint. They have proven they can rock many times in the past, and with great success! Here the musical artistry is more controlled and, as a result, becomes even more beautiful. The addition of strings has provided a 'lushness' in places that was missing before. Dare I say it, 16hp at times sound elegant!
Lyrically these songs are as gripping and unforgettable as ever. "Praying Arm Lane" and "Poor Mouth" are among the finest pieces David has ever written. Familiar denizens of the dark land where 16hp is wont to inhabit are back for return appearances: Christ, Satan, persevering saints and woe-begone sinners. Of special note here are several references to Narnia (in "Clogger," "Splinters" and "Just Like Birds"). Witness the power of a redeemed imagination in David's tremendous writing. It rarely gets any better than this!
One song I keep going back to is "Nobody 'Cept You," the Dylan cover. This has been a favorite of those who have seen 16hp live, but now we have it for keeps! Thanks, guys! For me Secret South proves right (once again) those of us who consider ourselves 16hp "pushers." We traffic in their music. We even try to get our friends addicted, and sometimes it works! I consider Secret South tremendous ammunition for spreading the fame of my favorite band. Let's just pray they don't stay such a secret much longer..
Descargar
Writte a comment , it's only i need, PLEASE
Escribe un comentario , es lo único que te pido
Publicado por Hope Against Hope en 18:10

Thank you for 16 Horespower and Big Black! Great blog!

Wovenhand has added immeasurable richness to my life; I have been listening to them/David Eugene Edwards for most of the past two years.

I have finally decided to go back and check out more of 16hp. Totally strapped at the moment, I amusing this to tide me over until I can afford the LPs and CDs.

Thank you very much for sharing.