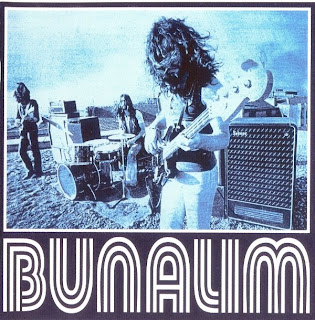 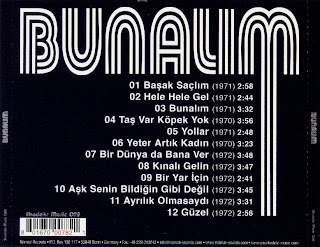 Bunalim - Bunalim (1970-1973)
Mp3 @ 192 kbps - 51MB
I was amazed by the detailed and well worked out biography in the booklet of this reissue (with many more details to the info I previously assembled), the many rare photographs being collected, or the whole completeness of the collection. This is finally the first official assemblage of Grup Bunalim’s repertoire.

It was already clear to me, after having compared music from all other Turkish bands with singles, that Bunalim was much heavier, and more garage psych than any other band around. Being different than the others, for them it was more difficult to cut singles, so not much of what they were capable of or ever showed was put onto vinyl format. They just appeared on 6 different singles, 12 tracks in total.

In the booklet’s biography I found many connections with other important Turkish rock bands from that period for many of the individual members.

The band was founded in 1969 and lasted until 1972. The first drummer left in 1970 to join Karadslar with Cem Karaca. The next drummer Hüseyin Sultanoglu played also with Cem Karaca’s groups Kardaslar and Dervisan, while drummer Nihat Örerel played with Erkin Koray amongst others, while another temporary drummer, Mehmet Gözüpek performed later with Ersen’s Dadaslar. Bass player Ahmet Güvenç can also be heard on “Elektronik Türküler from Erkin Koray, and with the later Baris Manço’s Kurtulan Express.

From the 6 singles with Grup Bunalim (1970-1972), one was released under name of Aziz Azmet (singer of Mogollar, but also participating with Bunalim for a while), another under the name of Rifat Öncel. After this the band reformed as the hard rock band Ter, accompanying Erkin Koray during his heaviest rock period.

The order of the tracks is well compiled, starting with an Anadolu Pop track (this style is the generally, media stimulated, style of local folk with rock instruments), “Basak Saclim” showing already the heavy details, then building up and showing better with each track the heavier approach of the band. “Tak Var Köpek Yok” for instance with heavy fuzz, bass, drumming and singing is very garage-like showing the band’s creative rawness, ending the track with a bit of acoustic guitar in the end (some conversations with their in that time manager Cem Karaca in studio), and a dog barking as a conclusion ! The intro craziness on the great song “Bir Dünya da Bana Ver” is completely over the top, but had to be limited to a energetic few seconds, leaving the attention to the song, with of course still heavy elements. At the time of the ninth track, the music finds its way back to the Anadolu folkpop tracks, finding some accumulation. Also it is nice to hear how the group’s approach hides itself in energy outbursts behind these still good tracks.
http://progressive.homestead.com/turkey.html
Descargar
Writte a comment , it's only i need, PLEASE
Escribe un comentario , es lo único que te pido
Publicado por Hope Against Hope en 17:56

Cover of a cover, how classic hahaha. I've been looking for something else that approximated the organ-heavy style of Iron Butterfly. This looks like gold.