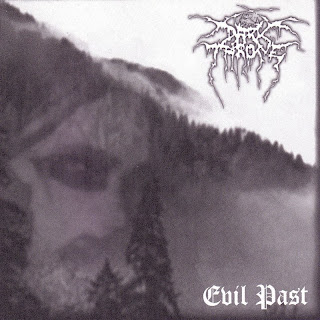 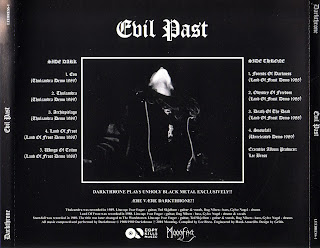 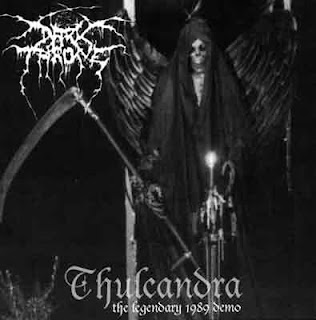 This compilation of old Darkthrone material features songs from three different sources. All the stuff on Evil Past predates the time when Darkthrone found the voice that made them the seminal band that they are with albums like Transilvanian Hunger or A Blaze in the Northern Sky.

The first of the three sources is the Thulcandra Demo, which until now was most easily found on the Darkthrone/Mayhem Split. If you haven't heard that yet, it features three of the songs found on Darkthrone's first (and only death metal) album, Soulside Journey, but more raw and dirty. If you haven't heard that yet, imagine simple, Celtic Frost inspired death metal with some lulling breaks. This was when Fenriz did more than just the necro blast beat.

The next five tracks come off of the Land of Frost Demo, recorded in 1988. The pleasantly satisfying raw drum sound is replaced by what sounds like someone beating the hell out of a cardboard box and a tambourine. These tracks are a grab bag of various experiments (mostly failed) that Darkthrone played with. You'll hear some rather alarming vocals, like on "Land of Frost," where it sounds like the singer is doing that face flapping thing that cartoon characters do when they shake themselves off after being blown up.

On "Forests of Darkness," the band unsuccessfully runs the vocals and some of the music through something that gives things a wheezing electronic echo-like quality.

A few times the riffs on the Land of Frost Demo sound like Metallica. It's especially curious how a track on "Land of Frost" sounds like a rip off of "Unforgiven," but this demo pre-dates the black album!

The experimentation takes a rest on track seven, which is the most dark and evil on the five-song demo, and features a lulling break. Then Darkthrone is all over the map again with "Death of the Dead," which features more wacky cartoon vocals, and material that shifts from Metallica riffs to punk, another lull, and then doom.

The final track is an unreleased one called "Snowfall." It is superior to the Land of Frost Demo. The "Snowfall" on Evil Past is not the same "Snowfall" on Preparing for War, by the way. The latter is an essential instrumental epic, while the former is another track of dirty Darkthrone death. Evil Past's allure no doubt comes from the fact that it'd old Darkthrone stuff, and therefore should really only be bought by fans of the band who also like the band's pre-black metal manifestation.