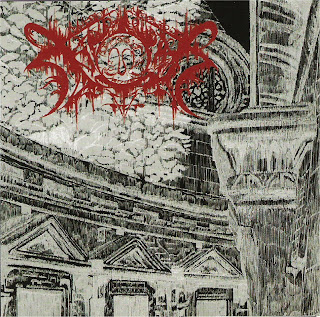 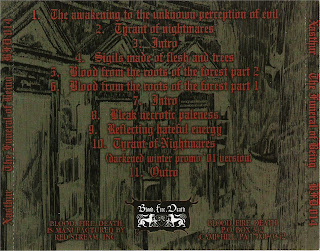 Xasthur - The Funeral of Being (2003)
Mp3 @ 192 kbps -80 MB
XASTHUR, a band that brings tears of joy to my eyes; seriously, it’s hard to bring Malefic and his artwork up around me: I may start to sob. XASTHUR has been at the forefront of the American Black Metal movement along with JUDAS ISCARIOT, LEVIATHAN, KRIEG and GRAND BELIAL’S KEY. Malefic took the one man band route and started XASTHUR with a sound that was reminiscent of a combination of BURZUM (of course), MÜTIILATION and THE CURE.

“Funeral Of Being” in my opinion is the weakest of all the XASTHUR albums, but that’s a lot like saying the Atom Bomb is weak compared to the H-Bomb, it still destroys anything around it and leaves the area clear for years. “Funeral Of Being” has some of XASTHUR’s more aggressive material, with more blast-beats, double bass and overall drum work than “Nocturnal Poisoning” before it and “Telepathic With The Deceased” after it.

One thing I really do love about “Funeral Of Being” is the atmosphere, although it is more aggressive, “The Funeral Of Being’s” atmosphere is ridiculously somber and dark, the muddy production provides a ethereal and organic feel to the whole album and really gives the feeling of utter hatred and complete isolation. Songs like “Tyrant Of Nightmares” pound away with blast beats and quickly shift to a humming melody leave the listener gasping for air, while the following song “Intro” (done on the third track) is unnerving and disturbing with reverse melodies and piano chords.

Another great succession of songs would be the back to back “Blood From The Roots Of The Forest” 2 & 1 (yes out of order, I didn’t mess up...yet) these songs are two of the most ridiculously atmospheric songs ever, especially “Part 1” a haunting melody of creeping death, that’s what that song is like. The best track on the entire album has to be “Reflecting Hateful Energy” with its amazing riff, haunting passages and utterly tortured vocals, a ridiculous song with some of the scariest vocal performances ever: simply divine, pure unadulterated evil energy. “Outro” is a continuation of the first two “Intro” with the piano and the cello and reverse melodies, truly a great way to end the record.


Now, it may seem like I only have praises for this album and that’s really true, while it is the weakest XASTHUR record, it is still some of the finest Black Metal ever made, if your new to XASTHUR, then this isn’t the album to get, try “Telepathic With The Deceased” or “Nocturnal Poisoning” but for fans of Ambient Black Metal or XASTHUR at all this is mandatory, KILLER! .
The Metal Observer
Descargar
Writte a comment , it's only i need, PLEASE
Escribe un comentario , es lo único que te pido
Publicado por Hope Against Hope en 19:11

Great blog..thank you very much!