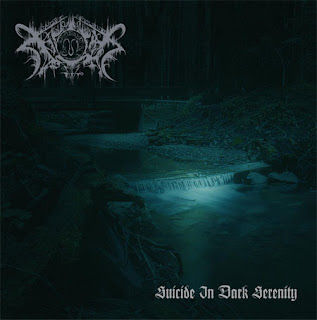 Xasthur - Suicide in Dark Serenity (2003)))
Mp3 @ 192 kbps -61 MB
This album is one that accompanied a period of time when someone close to me was succumbing to illness and dying. For me, this album breathed desolation and wild hatred into my soul... I have nothing but praise for this album. Xasthur's earlier work is where my loyalties lie, those albums being more recognizably evil and psychologically demented.

Suicide in Dark Serenity has a submerged quality which makes it seem as though the listener is being drowned slowly in a stagnant creek in cold and pitch blackness. The drums have a throbbing quality which can lend the music a certain brutality at times though this is definitely not the overlying mood of the album.
If one is feeling sickening hatred for the world and the human way, this album washes the consciousness into oblivion and slices pieces from your mind; ultimately this album after an entire listening takes the life out of you.

The riffing is droning and the synths accentuate the desolation; the vocals are sometimes indistinguishable from all the other swirling noise that constitutes the bleak sonic scape.

If you had to choose several Xasthur albums to listen to, I would recommend (in order) Suicide in Dark Serenity, Nocturnal Poisoning, The Funeral of Being, and A Gate Through Bloodstained Mirrors.
Descargar
Writte a comment , it's only i need, PLEASE
Escribe un comentario , es lo único que te pido
Publicado por Hope Against Hope en 18:48