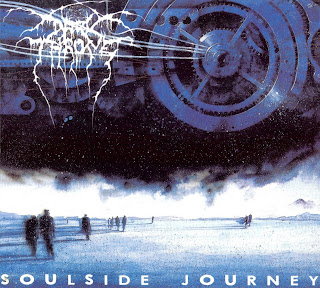 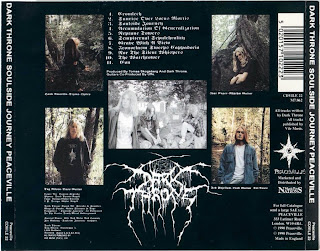 Darkthrone - Soulside Journey (1990)
Mp3 @ 192 kbps - 56MB
just don't see why this album isn't liked all that much. I think it's one of the better Death Metal albums ever released. This was also my first Death Metal album.
The level of musicianship on this album is amazing, especially compared to Darkthrone's later releases, which were very primitive and minimalistic in songwriting (not a bad thing; I also love their later stuff as well). This album shows a lot of promise, and I've been wondering for awhile how Darkthrone would be today if they'd stayed in the Death Metal path. This reminds me of some other bands, like Entombed or Slipknot for example, who played Death Metal in the beginning (check Entombed's Left Hand Path and Clandestine, and Slipknot's Mate. Feed. Kill. Repeat.), but have changed their style around a bit (Entombed adding Rock influences, Slipknot becoming Nu Metal).

Every song here is great, but if I had to pick a favorite, it'd probably be Sempiternal Sepulchrality. Other good songs include every song here. In fact, I'm FAR from being a big fan of instrumentals (on Metallica's first four albums, the only instrumental I can enjoy is Anesthesia - Pulling Teeth from Kill 'Em All), but the two instrumentals present here (Track 4, Accumulation of Generalization, and track 11, Eon) are great songs, which aren't pretentious and dragged-out, and they actually enhance the mood of the album as a whole.

Every song here except for the instrumental tracks has at least one guitar solo. Nocturno Culto's solos are some of the best I've ever heard. I honestly can't tell who's singing on this album though. No one in the lineup is listed as a singer, but Fenriz is listed as lyricist. In the interviews on this digipak version, from what I remember, neither Fenriz nor Nocturno Culto say who sings on this album. Although I have a feeling it's Fenriz, because I know he sings on Darkthrone's early demoes, yet the vocals here sound different. Oh well.

Overall, like the title of this review says, this is a true Death Metal classic. Few other Death Metal albums I've heard measure up to this (one album that is just as good, if not better, is Nile's Amongst The Catacombs Of Nephren-Ka). The music is very technical, yet very atmospheric (the keyboards in certain parts remind me of a combo of Morbid Angel's Altars of Madness and Nocturnus' Ethereal Tomb), and envokes unique moods just like Under A Funeral Moon or Transilvanian Hunger. If you find this in a store near you, or on Ebay or whatever, I highly reccomend this album.