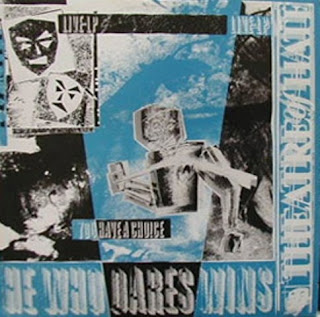 Theatre of Hate - He Who Dares Wins (1982)
Mp3 @ 192 kbps - 57MB
Live The bootleg cassette collectors' market had not seen anything like it. Theatre Of Hate had scarcely even had a record out yet, and already the bins were overflowing with live recordings, night after night of action preserved in hissy, distorted, multi-generational glory. Flattered beyond words, but slightly miffed, too, the bandmembers responded in the only way they could -- by unleashing their own string of limited-edition live discs, official bootlegs by name, but vast sonic improvements upon the underground fare. The Leeds concert is the best known of these; Berlin, recorded at the Tempodron on September 12, 1981, was harder to find at the time, but made the transition to CD regardless, and captures the band in full-blooded war-cry mode, a triumphant slam through a live repertoire that only got better each time you heard it. No need to name all the songs -- if you have a favorite Theatre Of Hate number, chances are it's here, and sounding as great as you ever hoped it would. In musical purist terms, Kirk Brandon's next project, Spear Of Destiny, was vastly superior to Theatre Of Hate. But for a live show that still throbs on in your soul, the earlier combo couldn't be beat.
Descargar
Writte a comment , it's only i need, PLEASE
Escribe un comentario , es lo único que te pido
Publicado por Hope Against Hope en 20:12