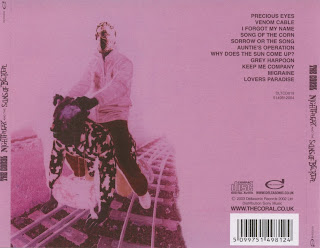 The Coral - Nightfreak & The Sons Of Becker (2004)
Mp3 @ 192 kbps -39 MB
This album has largely been overlooked by the music press (possbily due to the fact it is a miny), and seem to be dismissing the Coral as slightly silly, kind-of-retro scousers who because of their tongue-in-cheek attitude in the studio as well as onstage will never sell as well as the Zutons. This is a stupid attitude to have. Unlike, say, Oasis, the Coral do not just nick stuff from the 60s. Instead, they take 60s music (especially psychedelic music) as an INFLUENCE, which they then EXPAND UPON. And boy they sure do expand on it effectively.
This album is similar to their previous efforts, but manages to outclass them on several fronts. For one thing, it is less influenced by the Beatles (their debut was very Beatles-tinged), or Dylan (Magic and Medicine) (note these are not the only influences on their previous albums, just examples), but instead takes much more from Syd Barrett-era Pink Floyd, and, in my opinion, at least matches it in terms of deranged genius.

God knows what they're going on about in the sleeve notes, and at only 28 minutes long you could get the impression that it is needlessly short. But it isn't. All the songs are exactly the right length, and the album has exactly the right number of them. This is punk psychedelia. The Coral have, on purpose or just by accident, managed to balance perfectly the whimsical brilliance of Syd Barrett and the schizophrenic madness of the Pixies (yeah, I know, not psychedelic, but I'm not trying to pigeonhole them here, just explain their sound), whilst maintaining a genuine and wholly earnest streak of individuality, both in terms of music and in terms of style- the Coral are not just another NME, eighties-revivalist sort-of-rock band. The Coral are the real deal. If this wasn't a miny album I'm sure it would be hailed as one of the best of the year, if not all time, but instead we have to content ourselves with Scissor Sisters, Keane and the Streets.

Buy this album now. Everyone should own a copy of it. You'll know what I'm going on about when you hear it. Every song is a cosmic slice of... well I don't even know what, man. It's just great. This is the best album of 2004, and if this is just a miny then I can't wait to hear what the Coral are going to produce given a full forty minutes or whatever

Great blog..I appreciate all your hard work -- Keep it up!