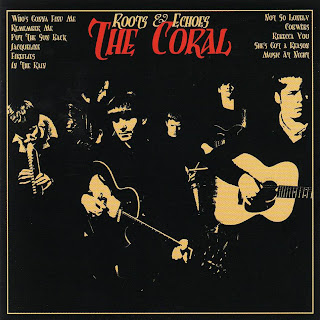 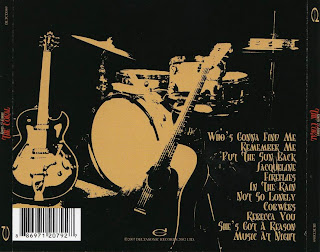 
"Roots & Echoes" is once again a major shift in mood and direction for The Coral. With every album they tweak and tinker with their sound ebbing from bombastic psychedelic sea shanties to pretty melodic tunes and back again, but always different than before.

"Roots & Echoes" finds the band mostly steering towards melodic ballads often times reminiscent of old country music but always with the production values of neo-psychedelic rock. There aren't too many surprises in terms of interesting tempo changes or distinguishable chord progressions that have made previous efforts so arresting. Most of the songs have a mellow and minimal approach, the productions and song writing reminds me of the e.p. "Nightfreak & The Son of Becker" but with overall better tunes.

That being said, there isn't a bad song in the set and some that I would even call great. The last three songs are the best of the batch. "Rebecca You" with it's mournful melody and lyrics are hauntingly beautiful- this is the most stirring song The Coral have ever produced. "She's Got A Reason" has all the interesting shifts, lyrics and instrumental breaks that one comes to expect from a great Coral song. Finally, "Music At Night", with the pulsating rhythm and swaying harmonies gives a sense of a modern take of the old country band Sons Of The Pioneers mixed with Johnny Cash late 50's output- great stuff.

Other standout songs on the album are "Who's Gonna Find Me" (the first single off the album), "Fireflies", and "In The Rain". Although I like "Who's Gonna Find Me" quite a bit, there's something about it that makes me think it's more of a retread rather than finding something new; but I can't really fault them for that, if that is the case.
Descargar
Writte a comment , it's only i need, PLEASE
Escribe un comentario , es lo único que te pido
Publicado por Hope Against Hope en 18:11

GREAT MUSIC,THE ONLY ALICE COOPER LP I CAN STAND!RESPECT FROM GREECE....

thank you very much